A response to the many painful acts of terror around the world.

A few weeks ago in Salt Lake City, over ten thousand people from the World gathered for a powerful Interfaith Gathering emphasizing peace, mutual respect, and sincere dialogue. The importance of such a meeting is underscored by the tragic and senseless murders of so many people in Paris, France. The number of injured, killed, and terrorized people grows in proportions that are as alarming as they are heartbreaking.

Equally painful is how many in our world move on from one tragedy when another gains our attention. Just prior to Paris, there was a bombing in a marketplace in a Shia Muslim neighborhood in Baghdad that killed 26 and wounded 60 innocent human beings. 40 people died in a double suicide bombing attack in Beirut, Lebanon the day before the Paris killings. Just days before, a Russian commercial airliner was bombed out of the sky over Egypt’s Sinai Peninsula killing all 242 on board.

Terrorism is a terrible reality in our World affecting every person of good will. We need to stand together as a family of Nations recognizing the human dignity and rights of every person. We must not permit terrorism pollute our minds and hearts with hatred or fear. Again, it is time for the Interfaith Community to witness to what is humane, moral, and just. The children terrorists would corrupt must see in us what it means to be motivated by compassion and justice.

Our hearts are broken as we stand in solidarity with the French people and all those who have been the victims of terrorism all over the world. We condemn religiously motivated violence as an affront to religion and all those who quest to do the right thing. We affirm the statement of The Council on American-Islamic Relations (CAIR):

“These savage and despicable attacks on civilians, whether they occur in Paris, Beirut or any other city, are outrageous and without justification. We condemn these horrific crimes in the strongest terms possible. Our thoughts and prayers are with the loved ones of those killed and injured and with all of France. The perpetrators of these heinous attacks must be apprehended and brought to justice.”

This is the time to examine ourselves, rooting out the temptation to engage in violence, hatred, prejudice, or fear. Humanity has been assaulted by people who have become accustomed to being inhumane. The Interfaith Council of Contra Costa County condemns the terrorists and their actions of hatred and murder. At the same time, we offer our prayers and sympathy to the people of France, Lebanon, Egypt, Iraq and Russia. We rededicate ourselves to working for justice as we seek a more peaceful World.

On Behalf of the Governing Board,
Rev. Will McGarvey
Executive Director
Interfaith Council of Contra Costa County

Additional Muslim groups speak out against the recent acts of terrorism.

The Islamic Network Group (ING) put out a video in response:

ING and its Affiliates nationwide join the global chorus of voices praying for and offering our deepest condolences to the families of the victims of today’s horrific, ongoing terror attacks in Paris, France.

No belief, cause, or grievance justifies the kind of gratuitous and senseless violence employed by the attackers in Paris. Such inhuman behavior accomplishes nothing and flies in the face of both natural ethics and the commandments of God. We pray that the perpetrators are found and quickly brought to justice. In the face of such tragedy, it is heartening to see people in Paris and around the world responding with acts of love and service, such as Parisians opening their doors to anyone in the city seeking shelter and safety for the night coordinated through social media, and taxi drivers across the city offering rides at no cost.

As Muslims, people of other faiths, and leaders across the world swiftly and fully condemn these attacks, we reaffirm the following values and principles that we have previously emphasized:

In a statement, CAIR said:

“These savage and despicable attacks on civilians, whether they occur in Paris, Beirut or any other city, are outrageous and without justification. We condemn these horrific crimes in the strongest terms possible. Our thoughts and prayers are with the loved ones of those killed and injured and with all of France. The perpetrators of these heinous attacks must be apprehended and brought to justice.”

CAIR has consistently and repeatedly condemned all acts of terrorism wherever they have occurred.

Washington, DC, November 13, 2015 – It has been a difficult evening for the entire humanity to watch terrorists barge in places and shoot people randomly. Over a hundred people have become the victims of terror and another hundred are wounded.

While the French authorities have not formally ascribed responsibility for this act of terror to any particular group – it appears to have been committed by Islamist extremists. Regardless of the religious affiliation the perpetrators may claim, we strongly condemn this heinous terrorist crime.

We applaud the French Police for doing their best to cut down on the loss of innocent lives and finally removing the immediate threat to lives. We stand with the people and Government of France as they deal with this tragic event and bring the people behind this terrorist act to account.

Our thoughts and prayers go out for the victims and their surviving relatives. May God give them immense patience to cope with this tragedy.

As Muslims, we are deeply offended and condemn this act of terrorism against innocent people; they have violated every societal norm as well as the rules laid by the very faith they claim to belong. This is not the act of a Muslim, but of rogues who claim to follow the faith. Quran 5:32 say, “If anyone slays a person, it would be as if he slew the whole people: and if any one saved a life, it would be as if he saved the life of the whole people.”

We have to tackle this issue head on, and cut the roots of extremism, while we are doing that, prayers and a candle vigil gives us some coherence. The children need to be with us to reassure them that God is a higher power and it gives hope and relief to all of us.

Lighting a candle is telling ourselves that we have taken the first smallest step that we can actually take, and hope and pray to find larger solutions.

United Muslims of America (UMA), an organization to encourage American Muslims to participate in the American political system, condemns the barbaric attacks on French civilians. It is totally unacceptable and outrageous.  We condemn these terrorist attacks in the strongest possible ways. To call the perpetrators of these heinous crimes in Paris “human” is to degrade humanity. They may call themselves “Islamic State” but their actions are barbaric and against the explicit teachings of Islam.

Our prayers are with those innocent people who got killed or hurt by these terrorists.  We strongly urge that these criminals be brought to justice and meet the full force of the law.

Unfortunately we have all been shaken by the devastating incident of the attacks that happened in Paris, Beirut and Baghdad that has led to the deaths of many innocent individuals.

Any such terrorist act, is not only a threat against human but the universal values we all deem critical in establishing and maintaining a peaceful world.

We pray that God will lead humanity towards a life full of peace and serenity. We ask everyone to join this prayer and to stand up against the inhumane actions of pure violence in order to restore humanity and tranquility.

All our sincere prayers go out to the victims, their families, their loved ones, and to all the people of Paris, Beirut, Baghdad and Ankara. 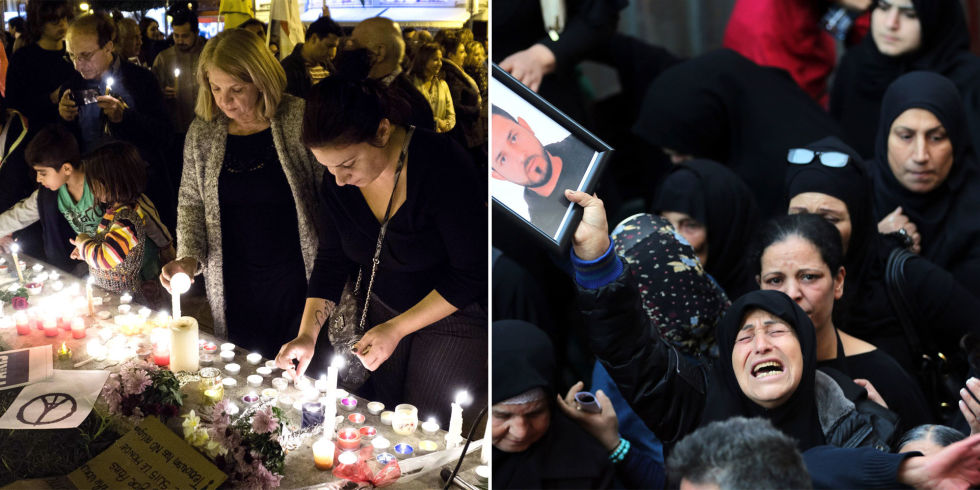 The Universal Muslim Association of America wishes to convey our deepest condolences to the victims and the families of the victims affected by all these tragedies.  No one should have to fear walking the streets of their neighborhoods, attending the funeral of their kinfolk or practicing their religion.  In the strongest way possible, we condemn all these acts of terror and we stand united against those who wish to sow fear and hatred amongst humanity.  We recognize that their goals are not just to terrorize but to divide people; to turn friend against friend and neighbor against neighbor.  We call upon the global community to not just denounce and condemn these acts but stand vigilant against their ultimate goal – to divide the world through fear and hatred.  We pray that the victims of these atrocities find peace and that the scourge of the Daesh terrorists realize that the human capacity of love will always be greater than their methodology of hate.
—Below are the words of UMAA Special Representative Dr. Sayed Nakshawani:

Give your prayers for Paris, give your love for Beirut, give your tears for Afghanistan, and give your heart for Iraq. When it’s a time of mourning, don’t make the argument about what was posted on Facebook or social media.

We all have the same enemy, and it is the cowards and the monsters of ISIS. If you want to express your anger, they are the ones that have attacked us.

I know that we all feel like that we are living in terrible times, and in truth these are horrifying events.

But at the same time, this is the moment where we have the potential to show the greatest humanity. If you are Muslim, tell a non-Muslim you love them or that you care for their wellbeing.

If you are a non-Muslim, give your love and compassion to a Muslim.

At your mosques and centers, hold sessions in remembrance of those who were lost in all these lands. Remembrance is not just for the divine personalities of our history, but for all of these innocents. ‪#‎prayforparis‬‪#‎prayforbeirut‬‪#‎prayforafghanistan‬‪#‎prayforiraq‬

Pray for the world.