June 15, 2016 By Will McGarvey
ING and Affiliates Stand in Solidarity
with LGBTQ Communities Against Hate 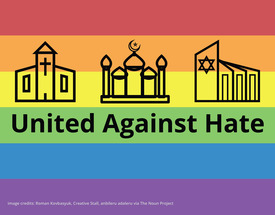 We as American Muslims express our deep shock and sorrow over the horrific attack in Orlando, mourn the loss of innocent lives, and extend our sincere condolences to the families and friends of those who lost their loved ones. Our prayers and thoughts go out to all those impacted by this senseless attack, in particular the LGBTQ communities which have been the most impacted by this brutal act. As Muslims, we know all too well what it is like to be members of a targeted community, and we appreciate the long and unwavering support the LGBTQ community has given us. We stand in solidarity with them and categorically reject homophobia and any form of bigotry, hatred, and violence against any individual or group on the basis of race, color, gender, disability, religion, familial status, sexual orientation, and national origin.

Click here for complete statement.
Click here to donate to support the families of the Orlando shooting victims. 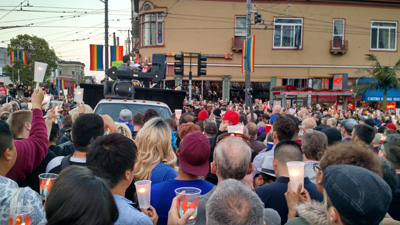 On Sunday night, thousands of people gathered in San Francisco’s Castro district for a vigil and march to City Hall to honor the victims of the Orlando night club attack and share their grief. San Francisco Mayor Ed Lee, Supervisor Scott Wiener, CA State Senator Mark Leno and various interfaith leaders spoke out for love and unity. ING’s Maha Elgenaidi and Dr. Suzanne Barakat were two of the Muslim leaders in attendance.
Click here for news and photos of the vigil.
Click here for video of Suzanne Barakat speaking at the vigil.
ING and Affiliates Add Their Names to Joint
Muslim Statement on the Carnage in Orlando

On behalf of the American Muslim community, we, the undersigned, want to extend our deepest condolences to the families and friends of the victims of the barbaric assault that occurred early yesterday morning at Pulse, an LGBTQ nightclub in Orlando, Florida. We unequivocally say that such an act of hate-fueled violence has no place in any faith, including Islam. As people of faith, we believe that all human beings have the right to safety and security and that each and every human life is inviolable.
Click here for full statement.
This Week’s ING Events
Getting to Know American Muslims and Their Faith
Wednesday, June 15, 2:00–3:30 p.m. Palo Alto
ING in Seattle at the Ramadan Interfaith Iftar
Wednesday, June 15, 7:00–10:00 p.m. Redmond, Washington
San Jose Interfaith Iftar Dinner
Wednesday, June 15, 7:15–9:15 p.m. San Jose